Connect with your Social Network

Connect with your Social Network

We recommend you to check details of Pricing Plans before changing. Click Here

Do you want to change pricing plan? Proceed Here

We recommend you to check details of Pricing Plans before changing. Click Here 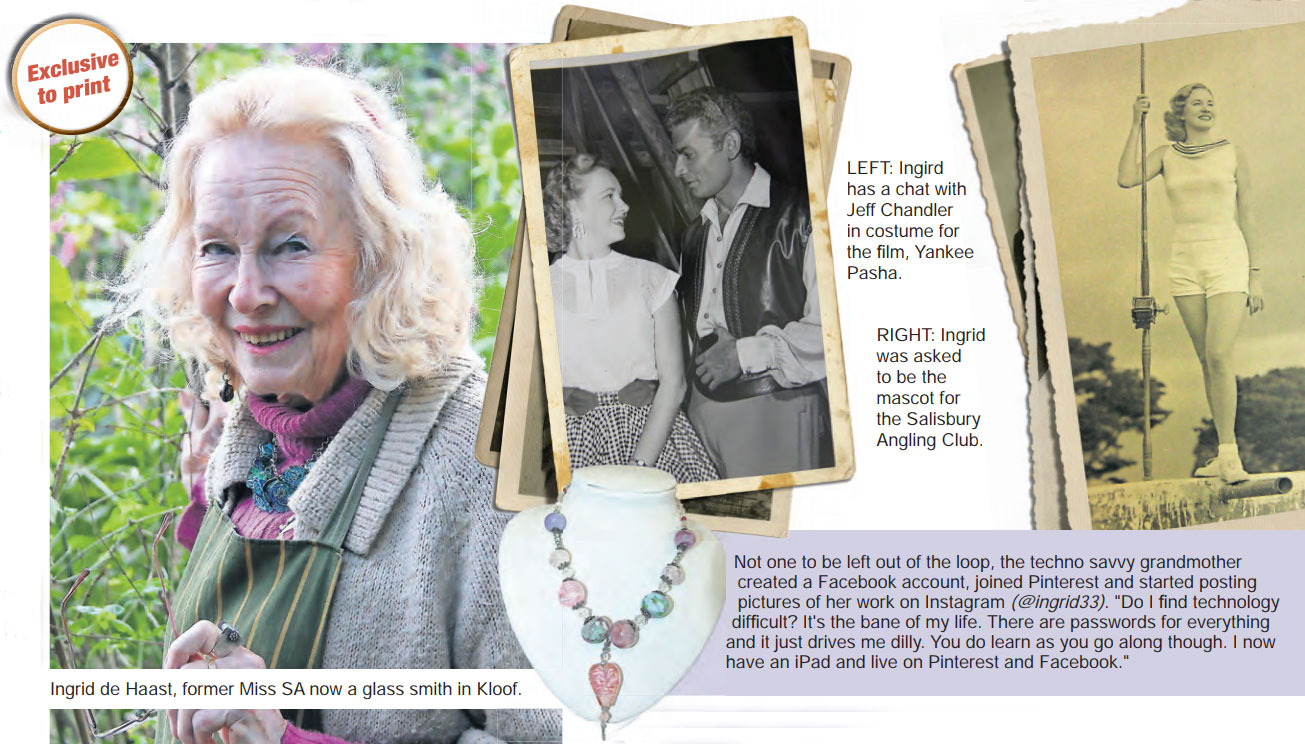 FROM beauty queen, to a short stint as an actress in Hollywood, to a doting mother, wife, potter and glass smith, Ingrid de Haast continues to lead a plethoric life.

At 85 years old, she continues to work with glass, moulding and transforming it into a variety of intricate and brightly coloured pieces of jewellery which she then sells at the local Shongweni market each weekend.

“It is something that I feel keeps me alive, even just going to the market and meeting new people,” said Ingrid.

Her warm smile is infectious and her love for her craft is palpable as she describes her recent work as we make our way to her studio, which is situated next to her home in Kloof.

Ingrid’s home, inside and out, is adorned with her art and a few of the glass pieces cast long and colourful shadows across the walls in the late afternoon sun.

She props herself onto the chair behind her workbench and quickly jumps into her life story, starting from her time in the army as a typist to joining a modelling agency and taking the title of Miss Salisbury (now Harare).

“It was quite an occasion really. I belonged to a modelling school and they wanted all of the girls to enter. I thought I would do it and never expected anything to come from it,” said Ingrid.

With Miss Bulawayo at her side, she flew to Johannesburg and was judged alongside women from across the country.

“I really didn’t know what to think,” said Ingird when she was announced as Miss South Africa for 1953.

“It was quite a blast but there was no crowning or ceremony,” she giggled.

Women from across the globe flew to New York and stayed in the Waldorf Astoria for a week. Ingrid recalls stepping off the plane in her gown, which she described had an enormous skirt embroided with proteas and pearls while carrying a Zulu shield and a fan of ostrich feathers. “I managed it, but I don’t know how,” she laughed.

The group of women flew to Long Beach for the competition where she was asked to speak about her country, South
Africa.

“I was a bit confused, so I spoke about Rhodesia (Zimbabwe) and South Africa. Back then I was a very naive girl. I could not have been more than 20 years old at the time,” she said.

Five of the contestants received screen stars and as she was booking her flight to see her aunt in Virginia, Jeff Chandler, a fi lm star and one of the judges, told her she shouldn’t be in a hurry to leave. She was offered a three-month contract to work at Universal Studios in Hollywood.

“We were in the background. We were dressed in elaborate gowns and we were just part of the scenery. We stayed at the Studio Club with all the young starlets and were picked up at 5.30am every day to have our make-up done. An acting coach took us under her wing and showed us what to do,” said Ingrid.

One of her more memorable moments was being told she needed to ride a horse for a scene, something she had never done before.

“We were given a day to learn. You just did it,” said Ingrid.

Once her three months were up, she turned her back on the life of glitz and glam and opted to return home for a simpler, but no less extraordinary life.

She met her husband when she was working for the army, but it was only upon her return that their relationship began to blossom.

They married in 1954 and a year later, she welcomed her first child into the world.

It wasn’t long after that the Rhodesian African Rifl es were called to Malaysia to help fi ght the communist terrorists. She lived in Singapore while her husband was in Malaysia.

“My life was so different over there,” she said.

Ingrid worked in an office for two years before they had to uproot themselves and opted to move to Bulawayo.

Upon her return, she chose to study pottery as she felt an unbridled need to create.

“Overseas I would make tapestries and rugs and had a yearning to do pottery,” she said.

She has since delved into other arts, such as glass.

“It fascinated me. So I did a bit of stained glass. In Portland they mentioned glass beads and didn’t think it was that exciting at the time. But then I started doing beads, taking a few lessons and continued to practice. It takes a lot of detailed work. You must have dexterous fingers. It is fascinating and mentally you don’t have any problems, only ever worrying about the little piece in front of you,” said a smiling Ingrid.

She and Bill were married for 50 years and he passed away in 2010. Ingrid looks away as if deep in thought and almost whispers, ” That was a very sad part of my life.”

For more information on COVID-19 and government regulation: Click here